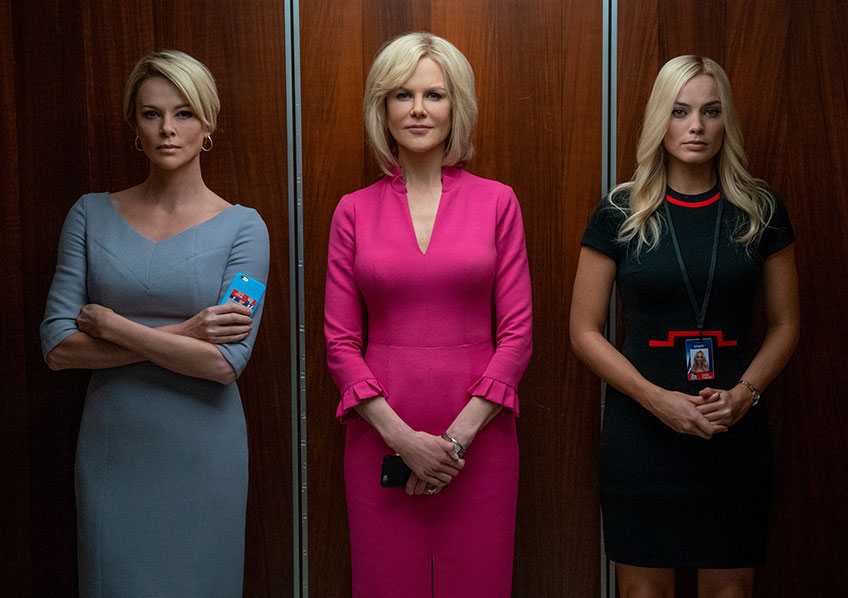 The makeup artists behind the film used prosthetics, base color, eyeliner, pounds of lash glue and lots of lip gloss to get the Fox look.

They were Roger’s angels. Megyn Kelly, Gretchen Carlson and the other women at Fox all had a specific look that was intended to please him. New York Magazine once described it as “pert noses, bronze skin, blonde hair”; they showed lots of leg, were almost always white and, in the end, appeared “conspicuously unnatural.”

Those women, and the sexual harassment they endured at the hands of the Fox titan Roger Ailes, are the subjects of “Bombshell,” the movie directed by Jay Roach and starring Charlize Theron, Nicole Kidman and Margot Robbie.

The film has won praise for capturing a toxic work environment and for the performances of its stars. It has also drawn notice for the uncanny resemblance the lead actresses have to the real-life counterparts they portray.

Makeup was key to that and to the story. Vivian Baker, the head of the makeup department, said that in these women’s world, it symbolized power — both their own and Ailes’s.

Getting that Fox look though wasn’t easy. Baker and Kazu Hiro, who created the prosthetics for the film, and the team went through troves of images, documentaries and spent months watching clips of Fox, to study the women’s faces and on-air uniforms.

“The look,” Baker said, “fits within that whole concept of women as Barbie dolls.”

Kazu Hiro, who is known for his work on “Planet of the Apes” and “The Curious Case of Benjamin Button,” and who won an Oscar for makeup for “The Darkest Hour,” said “Bombshell” was the hardest film he’s done to date.

In addition to the prosthetics came piles of base powder, eyeliner, eye lashes, eye shadow, heaps of lip gloss and wigs.

So far their work has earned a 2020 Critics Choice nomination and put the film on the Oscar shortlist for makeup and hairstyling. The Times talked to Kazu Hiro and Baker about the makeup in the film and what that look meant to the women who wore it.

Baker and her team watched hours of Fox to get to know the…
(Continue reading this article on NYT)
Interested in other Lash services you can provide to your clients? Look into Elleebana Lash Lift options.